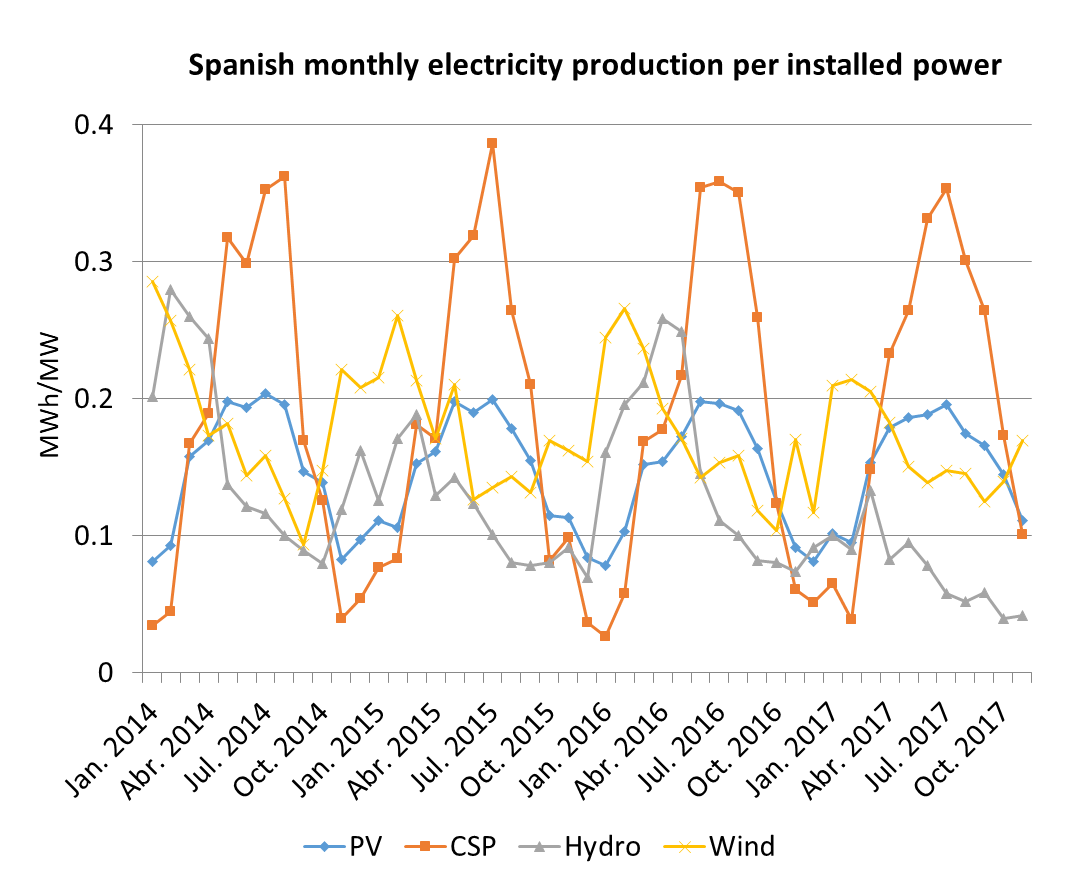 CSP is an electricity generation technology that uses heat provided by solar irradiation concentrated on a small area. Using mirrors, sunlight is reflected to a receiver where heat is collected by a thermal energy carrier (primary circuit), and subsequently used directly (in the case of water/steam), or via a secondary circuit to power a turbine and generate electricity. Analyses proposing a high share of concentrated solar power (CSP) in future 100% renewable energy scenarios rely on the ability of this technology, through storage and/or hybridization, to partially avoid the problems associated with the hourly/daily (short-term) variability of other variable renewable sources such as wind or solar photovoltaic.

However, data used in the scientific literature are mainly theoretical values. In this work, the actual performance of CSP plants in operation from publicly available data from four countries (Spain, the USA, India, and United Arab Emirates) has been estimated for three dimensions: capacity factor (CF), seasonal variability, and energy return on energy invested (EROI).

The obtained results show that the actual performance of CSP plants is shown to be significantly worse than projected by constructors and considered by the scientific literature in the theoretical studies: capacity factors in the same order as wind and PV, low EROI, intensive use of materials –some scarce- and significant seasonal intermittence. Low latitude locations with high irradiances, such as hot deserts, are more difficult to colonize (wind, dust/sand, extreme temperatures, water scarcity, etc.) and are found to be subject to seasonal fluctuations of the same order of magnitude as for other RES, such as wind and PV (in desert areas, dust storms can also cover large regions during several days). In relation to EROIst (standard), the values obtained from applying a conservative methodology are significantly lower than for other RES systems, in the order of 2.4:1 for current systems, decreasing to 1.7:1 using common materials and reaching 1.3:1 when considering common materials and transcontinental exports from deserts to high consumption areas (such as those proposed by the DESERTEC project).

In the light of the obtained results the potential contribution of current CSP technologies in a future 100% RES system seems very limited. The literature analyzing real power plants and national systems of renewable power technologies show that a bias towards overestimation of the performance of these technologies generally exists in the scientific literature. However, it is crucial to correctly inform society about the decisions to be taken in order to make a rapid transition to a renewable global energy system to avoid climate change and other environmental impacts, as well as the physical limitation of fossil and nuclear resources, remaining critical of the self-advocated solutions and avoiding wishful thinking.