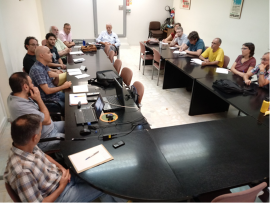 A first meeting with stakeholders was held at the headquarters of the Spanish trade union Comisiones Obreras in Madrid, on 11th July 2017 between 10:00 and 14:30.

The meeting was organized by the MEDEAS project coordinator (CSIC) and MEDEAS partner GEEDS Research Group of the University of Valladolid. The stakeholders invited were 14 experts in economics, energy and sustainability who belong to foundations, companies, labor unions, NGOs and universities.

In the first part of the meeting, MEDEAS researchers Jordi Solé, Óscar Carpintero, Carlos de Castro and Luis Javier Miguel presented the MEDEAS global model and the first results. The presentation showed the scope and capabilities of the model, but also the limitations in the interpretation of the results. Among the issues discussed was the importance of considering prices, in a implicitly or explicitly form, as well as the role of the financial system in the economic module. Another key aspect that the experts considered very important was to introduce into the model demand management policies.

Among the provisional results shown for the scenarios considered, the impossibility of maintaining economic growth in the coming years similar to the near past was highlighted. Economic stagnation or decline will probably lead to social and political changes that MEDEAS model cannot represent. A number of limiting factors, such as material availability, EROEI or land requirements for renewable energy, contribute to hampering the energy transition without changing the current development model. Likewise, with the scenarios studied, even considering a strong growth of renewable energies, the impact of climate change will be quite substantial and will be one of the limiting factors of economic development.

Stakeholders asked numerous concrete questions and made comments on the model. Among the issues of greatest concern are the uncertainty on the social impact of the energy transition and its consequences. Likewise, they showed interest in the open use of the model to experiment alternatives in simulation and to be able to contribute in some cases to the communication and diffusion of results.