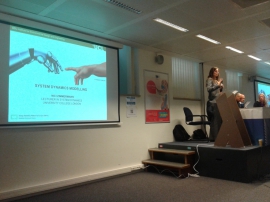 MEDEAS, as part of the cluster of the four Horizon 2020 projects (SET-NAV, MEDEAS, REEEM, REFLEX) working on “Modelling and analysing the energy system, its transformation and impacts”, participated in the successful organisation of the second conference of the Energy Modelling Platform for Europe (EMP-E) 2018 Modelling clean energy pathways, hosted by the European Commission DG Research & Innovation in Brussels on September 25 and 26, 2018. The event was held in the EC headquarters.

The programme of the two day conference is available here.

On the first day, Tuesday September, 25, between 16:00-17:30, MEDEAS organised the “Plenary session III: Modeling of behavioural aspects”. The session chairs were Davide Natalini and Kat Buchmann from the Global Sustainability Institute, Anglia Ruskin University, MEDEAS partners. The panelists who were invited to speak were:

After the initial welcome by Davide Natalini, Kat Buchmann posed the question about the added value of modelling. The answers she provided related to the fact that modelling is a simulation and a learning tool, similar to an experiment in the lab. Moreover, it takes several factors into account and can assist in finding causal relations. The most interesting aspect is a point by Margaret Morrison and Mary Morgan, two historians of economics, that models are seen as a mediator between theory and practice. These mediators often have a stronger voice and can lead to a stronger voice in policy. Lastly, models can predict something in the future and substitute for missing data.

The format of the session was a “this house believes” debate, where speakers take very strong positions. The three modellers defended their specific modelling approaches. Wander Jager made a case for agent-based modelling, Nici Zimmermann argued for system dynamics modelling and Martin Baumann debated in favour of linear optimization modelling.

Wander Jager was the first to present his case for agent-based modelling. He stated that he is interested in focusing on the social efforts of people and in understanding the social dynamics and social structures in moments of debate. In doing so he uses agent-based simulations, where artificial operations are built. He continued by stating that repetition is the dominant way people make decisions, even though sometimes they listen to other people or imitate or enquire what others are doing in order to check whether it is an interesting option. Additionally, there are people who try to optimize and deviate from the norm and propose new directions. These kinds of behaviours can switch within an individual who can perform habitual behaviour for a long time and then may change. He presented an example of how this plays out in a real situation in the model. He concluded by saying that if there are opportunities that are clearly better they are not automatically dominating in the market, so solutions are required and agent-based modeling is a tool that hopefully helps towards that direction.

Nici Zimmermann continued and presented system dynamics modelling. She stated that system dynamics is a socio-technical method, which is focused on people that are making decisions. It is a high level methodology that works at a strategic, as well as a policy level, and helps in policy design. She presented a simplified example of how the system dynamics model works and an example of a model developed together with stakeholders from policy. As dynamics are modelled over time there is no interest in static problems, but in how things evolve. Moreover, it takes an endogenous perspective, putting the decision maker into the model and looking at the feedback relations and the feedback behaviour that emerges over time. The explanatory power comes from the way the model structures influences, behaviours, perspective; it also comes from having people participate in the modelling and the validation process. The point is to realize how things happen and view things from more perspectives. The modelling of behaviour tries to be realistic and model decisions as they happen and it uses all kinds of information.

Overall, the session was very successful with the active participation of the audience during the question and answer session, where several attendees expressed their opinions and asked for the feedback and input of the panelists.

On the second day, Wednesday September, 26, between 09:00-10:45, MEDEAS co-organised with the REEEM project the “Focus group – Parallel session 1A: Open databases”.

Moreover, between 11:15-13:00, MEDEAS co-organised the “Focus group – Parallel session 2A: Open energy system models” with the REEEM project. The session chair was Jordi Solé from the Institute of Marine Sciences CSIC, coordinator of the MEDEAS project. The session was a joint effort with Berit Mueller and Ludwig Huelk from REEEM. The focus group was very successful, as it attracted approximately 32 participants with active participation and interaction throughout the event.

The session was in the format of a panel discussion. The panelists were:

Robbie Morrison started with his speech about Open models and Open Mod initiatives. From his perspective the legal issues around software licences are done and dusted. He is interested in the social aspects, as open source software comes with a proven social model, which was well established in the git project and many others. He continued about the open energy modelling initiative, which began in Berlin in 2014, a collection of internet services, which was a place that brought people together and advanced ideas. Regarding challenges, the number one issue is open data. What he is mostly interested at the moment is the tension between scientific advancement and good citizenship within these open projects. Another issue is software/project maintenance that lacks academic merit and the third issue is maintaining separation for MSc and PhD projects; one of the ways he considers that this can be dealt with is through the git, the version control system.

Sylvain Quoilin talked about open energy power system models. He shared two different personal experiences regarding open models. The first one was a project called CoolProp. The benefits of this project were that it made people adopt this software because it was open source; another benefit was the collaborative work and the interest it incited on people. Regarding scientific recognition through publications and citations, a paper was published describing the library and this paper is cited every time the library is used, which led to approximately 400 citations. Another benefit was free access for everyone. The second experience he described related to the development of the Dispa-SET model. This involved a few more challenges. The first challenge was the data, as it was not easy to publish the data so that everyone could download the code and the data. Moreover, they relied on solvers and usually they are not free although there are free versions for academics, which are not fully open. Another difficulty was that many people started developing the same kind of projects in different universities and there was not really a convergence. He concluded with two questions, the first being why energy models should be open. The answers he provided related to the quality of science, the effective collaboration within science, policy and the civil society, the productivity and burden sharing and the fact that research funded by public money should be public. The second question was why models and data are not open yet. The answers he provided were that there are some secretarial concerns, the unwanted exposure concern, political sensitivities and the fact that it is very time consuming.

Ludwig Hülk continued the discussion with his presentation “Beyond open source modelling”. He mentioned that the open source community is quite diverse and he highlighted that the community is heading towards open science and open source is just one part of it, but it also includes open data, open methodologies, open peer reviews etc. He presented three different distinct options relatively to open science, the first being the situation where input data, databases and models are closed in the energy modelling community and the only open aspects are the results or only part of them. The second situation related to more transparency, such data description, model description and publishing results. And finally openness, which includes the publication and description of open data, the model, output data, figures and reports and opening of the license. Another point made was about the community building around code and around data. He presented some extreme scenarios of building an open model from scratch and building on top of existing work. The last issue he pointed out related to ontology, which is a community effort everyone should contribute to, even non-open models. He provided a link to the forum of the openmod initiative, where they announced the development of such common ontology for energy system analysis.

Jürgen Kropp started his presentation by saying that his main concern is that there is no discussion regarding the purpose of openness. His second point was that openness is dealt with as a silver bullet, so he would like to discuss about the internal and external barriers in openness. In his point of view, openness is necessary when dealing with societal aspects or mechanisms. As internal barriers he acknowledged mistrust in the scientific community, the issue of publishing first, problems related to PhD theses. Regarding external barriers, he mentioned the expectations of policy makers. Concerning the purpose of openness he stated that he is in favour of openness when it accelerates scientific cooperation, but improvements are required. He considered that further explanations are necessary in terms of model capabilities in future projections and in the support of policy making. He also pointed out that openness in the policy area does not convey information in contrast to openness in the scientific community. To conclude, he stated that it is necessary to understand the reasons for openness (what to do with the models and for whom) and that the existence of barriers has to be recognised and it has to be accepted that they cannot change fundamentally, but the community can only adapt.

Overall, the participants of the focus group were strongly in favour of open models. The focus group was highly interactive and several attendees provided their input, feedback and experience throughout the session. An opinion that was strongly applauded by the attendees was that openness is the only way for science to progress. As there is a trend for openness, the question addressed to the research community was whether they are ready to organise this process. Moreover, it was pointed out that apart from the internal discussions in the scientific community it is important to transfer the results of the discussion to the officials. Several comparisons were made with the process of openness in the climate community. Another issue that was discussed was the inter-comparison of models. Due to the fact that there are no definite answers for the process of opening the EU TIMES models, Pablo Ruiz Castello from the Joint Research Centre informed that a survey trying to define together with the community how the model could be used is available.

Apart from the sessions, the MEDEAS project also had an active poster presence in the EMP-E 2018.