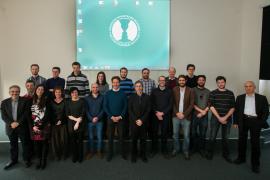 MEDEAS first General Assembly was organized between 14th and 17th February in Brno, Czech Republic by Masaryk University (MU). The General Assembly was attended by all MEDEAS partners, who participated in fruitful discussions concerning the project developments. Having completed the first project year this meeting aimed at addressing major issues that came up and specifying the future activities and challenges for the successful implementation of the foreseen tasks.

Side meetings among individual team members were organized on 14th February, while the General Assembly officially started on 15th February with a welcoming speech by the Dean of MU’s Faculty of Social Studies, Mr. Břetislav Dančák. Intensive discussions followed among all MEDEAS partners on the future work plan for the corresponding MEDEAS areas, such as scenarios definition, MEDEAS model development, energy models comparison and dissemination activities.

Moreover, UVa, MEDEAS partner responsible for the development of MEDEAS tool organized a short workshop for demonstrating the tool’s first version, focusing on its structure and main features. Part of the meeting, including the workshop, was attended by one of MEDEAS Czech stakeholders, Mr. Lukáš Rečka, a researcher at the Charles University Environment Center (CUEC) and PhD candidate at the Charles University, Faculty of Social Sciences, Institute of Economic Studies. The General Assembly also included a number of cultural and social activities for the MEDEAS partners.