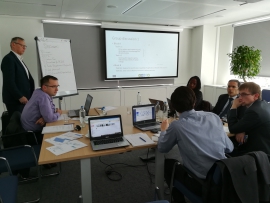 On the 16th April 2018, Ilaria Perissi from INSTM, member of MEDEAS project, participated in the workshop of the REEEM project on "Carbon leakage and Competitiveness: Macroeconomic projections for EU until 2050". The workshop aimed to present and discuss the results obtained in the WP3 of the REEEM project, a member of the LC21-2015 cluster. WP3 deals with the socioeconomic scenarios that could arise for European Industries as a consequence of World and EU decarbonizing policy. Moreover, it explores the role of carbon leakage on the competitiveness of industries in the EU, in particular, energy intensive industries and industries that use carbon not only as a source of energy, but also as a resource for processing the products (for instance steel industry). The issue explored is that industries could be tempted to move toward regions with less restrictive decarbonization policy (the so-called carbon leakage phenomenon), impoverishing the EU economy and risking to emit even more once outside the EU.

The participants of the workshop included the organisers from REEEM-WP3, Ilaria Perissi from MEDEAS, a participant from Set-Nav project and several stakeholders from industries, such as EUROFER - The EU Steel Association, CEMBUREAU - The EU cement association, InnoEnergy, EUROALLIAGES-Association of European Iron-alloy producers and others. The officer of the European Commission, Ms Quinn also joined the workshop and made an intervention on developments in the field of regulations of the EU carbon market (the widest in the world).

The works started with the presentation of the workshop methodology and objectives by Ulrich Fahl from IER (Institute of Energy Economics and Rational Energy Use, Stuttgart, Germany). The workshop consisted of a combination of presentations of the REEEM WP3 on ‘Economy scenarios’ results, followed by discussions.

Two case studies were presented and participants were divided into 2 groups and thematic discussions and brainstorming followed. The aim of groups’ discussions was to validate the WP3 modelling results and assumptions and to obtain stakeholder insights regarding key issues of the study.

As already mentioned, the goal of REEEM WP3 is to assess the economic consequences of low carbon policy measures on EU and world economy for the industrial sector. Such assessment has been conducted with the modelling tool NEWAGE, a computable general equilibrium model. The method of modelling consists of a dynamic recursive procedure that explores the economic agents (consumers, firms, etc.) and their interaction, with the aim to focus on the winners and losers of decarbonization, and analyze how decarbonization can drive changes in trade patterns. The time span considered in simulations is until 2050.

Introduction to the REEEM project

Francesco Gardumi from KTH (Royal Institute of Technology, Stockholm), REEEM project manager, introduced the REEEM project objectives. REEEM aims to get a comprehensive understanding of the wide system of implications that the current energy strategies, which focus on transition pathways toward a competitive low carbon energy society, have in terms of impacts on the EU economy, environment and the society.

To carry out this investigation, REEEM methodology makes use of a large set of models, split in 3 categories, society, economy (in WP3) and RE electrification models, linked together by common guidelines, which study the role of technologies and consumers in accomplishing low carbon transition pathways. For instance, each model provides an analysis of what could be the different barriers to lead the evolution of the EU energy system. The results will be gathered in a platform to perform ‘REEEM games’ in which competing teams are required to take a policy decision, pushed by national objectives as well as by the commitments at EU level.

The economic scenarios were built based on different efforts in world and EU decarbonization.

At the rest of the world (countries outside the EU-28), 4 scenarios until 2050 were taken into account:

Thus, what are the outcomes of different EU policy portfolios in the selected future?

Combining present ETS and EDS policy (BAU) with possible improvements derived from the "White Paper on the Future of EU" described above, we obtain:

ETS on all sectors: EU-ETS applied to all the sectors of the economy, including households and transportation with different possible caps (80%, 90% and 95%) for CO2 reduction in 2050 (the reference year is 1990).

The combination of world and EU emissions scenarios with policy portfolio options give the REEEM future scenarios presented in Figure 4.

The intervention of the European Commission - Ms Quinn

Ms Quinn discussed the issues of competitiveness of EU industries in the ETS and their exposure to a serious risk, which explains the higher share of free allowances emission quotas compared to other industrial installations, even in the future.

Three sessions of discussion in groups were carried out.

A) Highlight main policy option for decarbonization and ranking them.

B) Decarbonizing might have an adverse effect on industry competitiveness. Threats for the EU industry in medium-term and long-term

Beyond the very interesting and useful results of the project, all participant agreed on the utility of similar meetings among LCE-21 projects to share ideas and competences.

1/ The EU emissions trading system (EU ETS) is a cornerstone of the EU's policy to combat climate change and its key tool for reducing greenhouse gas emissions cost-effectively. It is the world's first major carbon market and remains the biggest one (https://ec.europa.eu/clima/policies/ets_en).

2/ The Effort Sharing Decision establishes binding annual greenhouse gas emission targets for Member States for the period 2013–2020. These targets concern emissions from most sectors not included in the EU Emissions Trading System (EU ETS), such as transport, buildings, agriculture and waste (https://ec.europa.eu/clima/policies/effort_en).