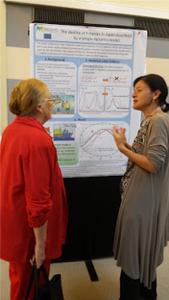 On July 18, 2016 and July 19, 2016 two papers were presented at the 34th International Conference of the Sustem Dynamics Society, which took place in Delft between 17th and 20th July 2016. The first paper was entitled "The decline of fisheries in Japan described by a simple dynamic model" and was presented by MEDEAS consortium members Ugo Bardi, Sara Falsini and Ilaria Perissi (INSTM) during the poster session "Market Dynamics of Resources". The second paper, entitled "The Hubbert game: a simple board game designed to teach the dynamics of the overexploitation of natural resources", was presented by MEDEAS consortium member Ugo Bardi (INSTM) during the session "Environmental Management 2: Facilitating Model-based Learning about Human-Environment Interactions". These presentations are based on the same modeling method that underlie the main MEDEAS effort. In particular, the study on fisheries has the purpose of testing the method on a simpler systems than the complete economy of a large region. That has a considerable value, since it can demonstrate the validity of the methods in the real world. The other presentation, “The Hubbert Game” can be seen as a demonstration of the validity of the “agent based” approach as a dissemination tool of system dynamics with college students as targets.

Image: INSTM Member Ilaria Perissi (on the right of the photo) discusses the modeling of fisheries at the Delft conference on system dynamics.