MEDEAS presentation of results during a talk at the ICM-CSIC with the title “Sustainability and energy transition: myth or reality?” 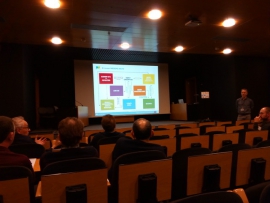 On February 22, 2019, Jordi Solé Ollé from ICM-CSIC, coordinator of MEDEAS project held a presentation of MEDEAS results to date.

During his talk, Jordi Solé Ollé stated that MEDEAS reaches its final year of life and we can already draw important conclusions about areas of general interest such as the evolution of the economy, the interactions between technological development and improvements in efficiency, the impacts of climate change in our society in the medium term or the needs and uses of the planet's surface for renewable development. His talk was divided into two parts; in the first one the documentary of the project was presented, where some results are listed and in the second one some of the results were analyzed in detail to open a debate with the audience. The projections presented were based on the MEDEAS models, which allow us to study the evolution of variables such as GDP, the material resources necessary for economic development and the impacts of this development at a global and European level. Jordi Solé Ollé pointed out that the results alert us, in addition to the impacts that greenhouse gas emissions will have on our socio-economic system, on how the situation of humanity will become critical in a few decades if we do not redirect current trends.