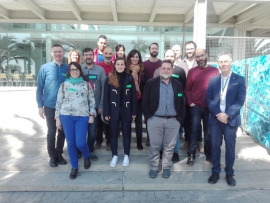 On February 27, 2019, ICM-CSIC, MEDEAS coordinator, organized a meeting at their premises in Barcelona to present MEDEAS project and models. The participants of the meeting were a group of socio-economic data analysts, part of the Network of Observatories of the Local Economic Development (XODEL), which is formed by 21 socioeconomic observatories and coordinated by the Barcelona Council (DIBA). The Observatories compile, organize, generate and disseminate, on a permanent basis, socioeconomic information of interest for decision-making, in order to promote local economic development. The majority of observatories belong to Town halls and Regional Councils. The academic profiles of the members of the observatory network are mostly sociologists, political scientists, geographers and economists, and statisticians.