Scientific Publication "Assessing vulnerabilities and limits in the transition to renewable energies: Land requirements under 100% solar energy scenarios" based on MEDEAS Project Results 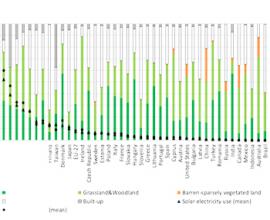 MEDEAS partners from the University of Valladolid (Spain) in collaboration with Iñaki Arto, researcher at the Basque Centre for Climate Change, have just published a scientific article in Renewable and Sustainable Energy Reviews, entitled "Assessing vulnerabilities and limits in the transition to renewable energies: Land requirements under 100% solar energy scenarios".

While fossil fuels represent concentrated underground deposits of energy, renewable energy sources are spread and dispersed along the territory. Hence, the transition to renewable energies will intensify the global competition for land. In this analysis, we have estimated the land-use requirements to supply all currently consumed electricity and final energy with domestic solar energy for 40 countries (27 member states of the European Union (EU-27), and 13 non-EU countries: Australia, Brazil, Canada, China, India, Indonesia, Japan, South Korea, Mexico, Russia, Turkey, and the USA). We focus on solar since it has the highest power density and biophysical potential among renewables.

The results show that for many advanced capitalist economies the land requirements to cover their current electricity consumption would be substantial, the situation being especially challenging for those located in northern latitudes with high population densities and high electricity consumption per capita. Replication of the exercise to explore the land-use requirements associated with a transition to a 100% solar powered economy indicates this transition may be physically unfeasible for countries such as Japan and most of the EU-27 member states. Their vulnerability is aggravated when accounting for the electricity and final energy footprint, i.e., the net embodied energy in international trade. If current dynamics continue, emerging countries such as India might reach a similar situation in the future.

Overall, our results indicate that the transition to renewable energies maintaining the current levels of energy consumption has the potential to create new vulnerabilities and/or reinforce existing ones in terms of energy, food security and biodiversity conservation.

The complete article can be found here and will be freely available until 21st June 2017, while an accepted author manuscript (AAM) will be permanently available here. 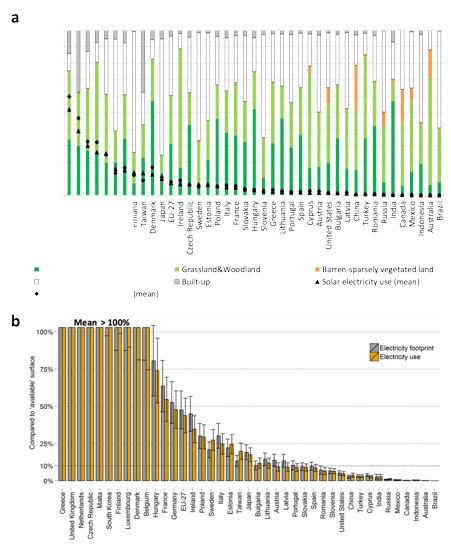