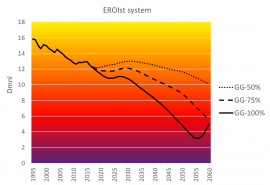 Iñigo Capellán-Pérez, Carlos de Castro and Luis Javier Miguel, MEDEAS partners from the University of Valladolid (UVa) have just published a scientific article in the Energy Strategy Reviews Journal, entitled: "Dynamic Energy Return on Energy Investment (EROI) and material requirements in scenarios of global transition to renewable energies". This paper belongs to the Special Issue organized within the Energy Modelling Platform for Europe (EMP-E) 2018 and reports results from MEDEAS WP6.

A favourable rate of energy surplus with relation to the required energy investments over the long-term has been associated in fields such as biology or anthropology as a key driver of increasing complexity and evolution for plants, animals and humans. By analogy with the financial returns, the Energy Return On Energy invested (EROI) is a common metric in the literature used to assess the performance of different energy technologies. MEDEAS models are one of the first forecasting modelling tools to dynamically and endogenously project the EROI of the full energy system and feedback its evolution to the rest of the system. To capture this phenomenon is relevant given that the energy transition will require not only significant monetary, but also energy and mineral investments.

The proposed approach includes 3 key novelties which go beyond the current state-of-the-art of the energy-economy-environment models by including:

The importance of dynamic and endogenously computing the energy and material investments is illustrated by the simulation within the integrated assessment model MEDEAS-W of three scenarios with different targets of penetration of renewables in the electricity mix to 2060 under a Green Growth narrative (GG), which is an alternative paradigm frequently assumed to avoid the adverse impacts on human societies of the global environmental change.

The results obtained in this work indicate that achieving high penetration levels of renewables in the electric system by 2060 consistent with the Green Growth narrative would decrease the EROI standard (EROIst) of the entire global system from current ~12:1 to between ~3 and 5:1 by the mid-century. These EROI levels are well below the thresholds identified in the literature required to sustain high levels of development in current industrial complex societies. This would translate into a substantial energy overdemand reaching a peak of +35% during the transition for the case of 100% RES; i.e. the production of energy would need to increase by 35% in order to supply the same level of net energy to society during the transition to RES. The increase in energy investments would imply a higher primary energy consumption which in turn would intensify the issues of environmental impacts and resource depletion. Hence, if not properly managed, the transition to RES could imply a strong reduction in the net energy available for society. In relation to material investments, the obtained results show that RES deployment would require a substantial amount of minerals relative to the current estimated levels of reserves and resources, driving in fact a substantial re-materialization of the economy which would exacerbate eventual mineral risk availability in the future. In particular, estimated cumulated extraction demand would surpass the current level of reserves in GG-100% for tellurium, indium, tin, silver and gallium. As a corollary the results obtained put into question the consistence and viability of the Green Growth narrative.

The complete publication can be found here.