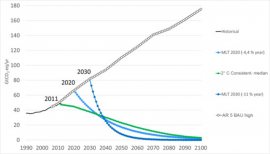 The Paris Agreement, ratified in 2015, pledged to reduce greenhouse gas emissions within a Global Carbon Budget that limits the global temperature increase to less than 2 °C. With the Roadmap 2050 mitigation measures, the European Union has a target to reduce emissions by 80% of their 1990 value by 2050 but without giving an estimation or a maximum ceiling for the total amount of cumulative greenhouse gases emissions over that period. Thus, the impact of the EU regulations on global warming remains unestimated. The aim and the novelty of this study are to develop a set of potential European emissions trajectories, within the Global Carbon Budget and at the same time satisfying the Roadmap 2050 goals. The result of the study highlights the urgency to reinforce mitigation measures for Europe as soon as possible because any delay in policy implementation risks the Roadmap 2050 mitigation package being insufficient to achieve the objectives of the Paris treaty.