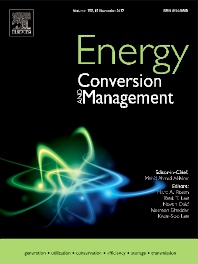 This study reviews the technologies and systems that are being proposed or proven as alternative to fossil-fuel based transportation, and their prospects for their entry into the post-carbon era, from both technological and energetic viewpoints. It also provides estimations of the energy costs for such transition under conservative assumptions.

A 100% renewable transport providing the same service as global transport in 2014 would demand about 18% less energy. The main reduction is expected in road transport (69%), but the shipping and air sectors would notably increase their consumptions: 163% and 149%, respectively. This is derived from the need to produce natural gas from electricity in order to power the engines of planes and boats and assuming an airplane transportation reduction of 50%.

Table 2. Estimated energy used for present and future transport, by sector. * The three values correspond to the use of hydrogen, methane and jet fuel, respectively, as the main fuel for the aircrafts.

According to this study, a set of measures to anticipate the possible risks in the transition is recommended. Such measures should be supported and fostered by governments and civil society:

Another conclusion of this study is that a renewable transport system is feasible but not necessarily compatible with the usual exponential growth of resource consumption. We are entering an age where the investments required in the next few decades will involve the use of large fractions of the reserves of important metals such as Cu, Ni, Li, Pt and Pa. Some of these metals (e.g. Pt and Pa) have specific physical properties that make them essential. Therefore, any policy for the necessary renewable transition may no longer be based exclusively on prices and incentives, but must also consider geological reserves and material scarcity. In the next 50 years, the lack of elasticity of metal reserves will probably hasten the necessity for designing a post-capitalist economy, which will use new economical tools. Some of these tools would be the use of geophysical and sustainability indicators, abandonment of GDP as the main indicator of economic success, incorporation in the economy of long-term planning and scientific environmental assessment and, most importantly, introduction of new mechanisms which may create prosperity without necessarily increasing the consumption of resources and materials.